Planet Warriors were a bootleg series of action figures produced around 1980's, during the action figure craze. It consisted of two action figures and two vehicles, pictures of them however are incredibly rare. Only known information about the line is official figure descriptions from blister packaging released on a now defunct Tumblr bootleg-related blog, and a few photos of actual figures. The figures were presumably manufactured in Hong Kong or Taiwan. 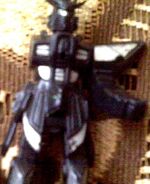 Plot (Found on back of blisters, as told by the figure photo taker)

"Year 2100. Evil MechTan monsters and their menacing leader Morph decided to conquer earth. Went forth and fight them with legions of human!"

The figures themselves are rather poor in quality. The plastic is very cheap, and paint is applied sloppily. No accessories are included. Two "vehicles" are a rocket launching vehicle not in-scale with any of the figures, and a transforming robot that turns from a truck to a humanoid creature. Not anymore information is available, and figures have yet to surface on EBay.