In Spring of 1999, a new addition to the nonogram puzzle game series Picross was announced and widely advertised/featured in Japanese magazines. Titled Pokémon Picross, the game was being developed for the Game Boy Color, and would have been a Pokémon themed version of Picross.

Intended as a "spin-off" of the hugely successful Pokémon Game Boy titles, Pokémon Picross, for whatever reason, never saw the light of day.

Notably, on April 1st, 1999, a Japan-only downloadable SNES title, Picross NP Vol. 1, was released, featuring twelve Pokémon puzzles. It is largely assumed that Pokémon Picross was either reworked into Picross NP Vol. 1, or that whatever had been finished of the game was implemented into it.

However, on December 3, 2015, Pokémon Picross was released on the Nintendo 3DS eShop. It doesn't really play like the cancelled GBC version though, but there are similarities.

In an unexpected twist, a Japanese production ROM of Pokémon Picross surfaced on September 9, 2020 as part of the Nintendo "Gigaleak 3", the third in a series of leaks of internal Nintendo data that had taken place that year. Believed to have been a build submitted for certification by Nintendo, the leaked build is fully complete and can be played from start to finish. 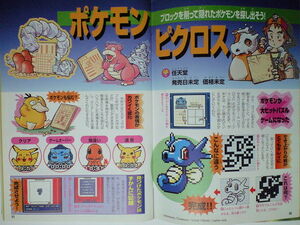 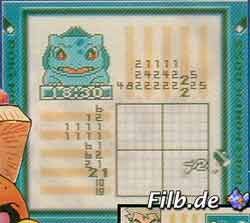 Closeup of gameplay screenshot, taken from an advertisement.
Add a photo to this gallery
Retrieved from "https://lostmediaarchive.fandom.com/wiki/Pokémon_Picross_(Unreleased_1999_Game_Boy_Color_Title)?oldid=175625"
Community content is available under CC-BY-SA unless otherwise noted.