"Life Sucks" is an unfinished episode of Ren & Stimpy conceived around the time when John Kricfalusi left the show in 1992 after a falling-out with Nickelodeon because of the unaired Season 2 episode "Man's Best Friend".

The episode begins with Stimpy happily watering his garden when Ren comes and tells him that life sucks. Stimpy disagrees with him, so Ren tells him the story of the Children's Crusade. Many Spumco employees considered it the best Ren & Stimpy episode ever written. The episode was to be revived for the 2003 revival, but after the controversy the revival had, the hopes of "Life Sucks" getting completed are very slim.

Although only 8 minutes of the cartoon's animatic have been released, John Kricfalusi has posted several sketches of additional scenes to his blog. [1] 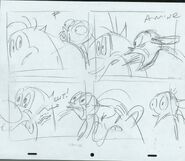 Stimpy's had it with Ren 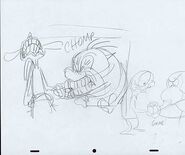 Stimpy wants to escape to the world of his favorite show, Floyd of Mayberry