"Storyboard Jam" is a storyboard of the cartoon “Rugrats”. The storyboard that was started, passed around, and added to by different members of the production crew of the cartoon often resulting in rather lewd or offensive depictions. Production crews are said to have often used storyboard jams to relieve anger and tension while working on a project.

One such storyboard jam, titled "Incredible", began life around 1998 within the Klasky-Csupo production crew of Rugrats (according to a now-deleted livejournal recount posted by one of the directors/animators of Rugrats, Steve Ressel[1]). Ressel has recounted that the first page of the storyboard consisted of "Angelica being a bitch to Tommy, so Tommy gets her a drink in the kitchen and puts in dog food and draino, then toddles back to Angelica". After being handed the comic, Ressel initially pushed it away in disgust, before eventually making some additions of his own.

The first page added to by Ressel (the third page overall, and the only one that he was able to recover and post online) depicts (after Tommy returns to Angelica with the poisoned drink), Stu arriving home before angrily abusing everyone and making sexual remarks to Angelica, while Tommy twitches uncontrollably. Allegedly, some of the other artists were displeased with Ressel's additions to the plot, though regardless of their disapproval he continued the storyboard, beginning the next page with "a close up of Stu's crotch (on model) and then a cut away showing his entire pelvis is in fact two tight and well rounded testicles with a tiny cock dangling from above. Lightening was bouncing around and words appeared saying 'BALLS OF THUNDER!', or something to that effect".

In total, Ressel ended up adding roughly 12 frames to the storyboard, whereas most of the other artists had previously contributed just 3-4 frames each. After this point, the comic was given to other artists to add on, and this later resulted in images of Angelica's hands stroking Stu's testicles, followed by a barrage of incest sex scenes. Ressel has noted "I was disgusted, even, when I saw what had become of the comic".

While someone was taking the storyboard to show the production crew of The Wild Thornberrys, an executive producer "saw it, was disturbed, and confiscated the jam... and thus it ended". It's unknown if the missing pages were destroyed or simply locked away, but either way, it is unlikely we will ever see any more pages of this infamous comic. 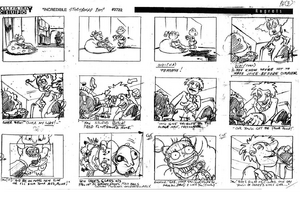 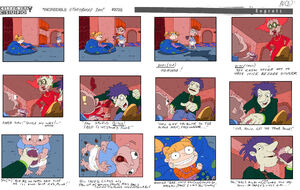 A colorized fan-edit of the leaked page 3.