Sammy (originally named Peewee) was an American animated TV series created by David Spade and Drake Sather (who also wrote for SNL, News Radio and the movie Zoolander) and produced by Brad Grey Television and Desert Rat Productions for the NBC network. Only 2 of the produced 13 episodes were aired, those being Denver and Sammy Makes Amends. The series ran from August 8th until August 15th, 2000, before being cancelled presumably because of low ratings and lack of any major promotion for the show, which could explain why the series has gone lost in the first place. The episodes that aired have never made their way onto the internet, and still to this day, the series has never been reaired, and remains lost.

The series follows the life of a comedian named James Blake (voiced by Spade), whose father, Sammy (also voiced by Spade) returns after several years to free-load off of his son's success in the industry, and also to attempt to reconstruct his fractured family. The series was loosely based on Spade's own experiences in life, and the titular character; Sammy, was based off of his father; Wayne M. Spade, who also served as a consultant writer on the show.

Although like I had said above, only 2 episodes were aired, NBC themselves as well as TV.com released episode descriptions for episodes 1-8. There is no other information on the final 5 episodes (except for 100th Episode Party, for which a bit of a script for it, as well as a few background character designs were found by Wiki user Loana LaLande) beyond the fact that they were produced, according to a voice actress on the show; Olivia Hack.

The descriptions, ripped from TV.com are below:

The start of this animated comedy finds new Hollywood 'It' Boy, James Blake, reunited with his lovable, absentee and philandering father, Sammy Blake. The series kicks off when Sammy tries to re-establish relations with his family just as James' movie career is taking off. Also in the picture are James' incompetent, handyman brother, Todd, who just wants things to be as they were years ago when the family was together. Along the way, James' super agent, Mark Jacobs, attempts to keep the 'heat' on James while fending off Sammy's attempts at getting involved in James' career. Helping to keep things together for James are his trusty, sharp-as-a-tack assistant, Kathy Kelly, and his manager/brother, Gary. 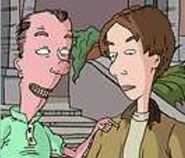 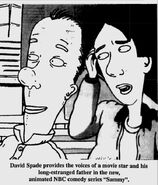 Add a photo to this gallery
Retrieved from "https://lostmediaarchive.fandom.com/wiki/Sammy_(2000_TV_series)?oldid=191533"
Community content is available under CC-BY-SA unless otherwise noted.