Scratch 'n' Sniff's Den of Doom was a 2007 quiz show hosted by the two titular puppet Hyenas; Scratch and Sniff. Each episode was about the Hyenas quizzing 5 contestants to pick each one off one by one to dunk in their cooking pot to eat for their dinner after the show. Only one contestant has a chance at surviving each show but they must still answer a 'Killer Question' correctly in order to walk free, if they don't; they too will wind up as the Hyenas' dinner!

Almost every episode has most of its footage missing with only short clips of different episodes remaining. It is said that 15 episodes were produced for the show, however this number may be incorrect. While the show ran through 2007, re-runs of the show ran until very early 2011 before stopping completely.

An episode of the show was uploaded for the first time on the 19th of June 2019, 8 years after its last broadcast. 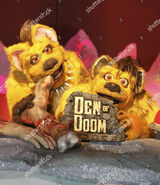