In 1980, Marvel Comics introduced She-Hulk in Savage She-Hulk #1 as the character Jennifer Walters who was the cousin of Bruce Banner and was given a diluted version of Hulk’s powers during an emergency blood transfusion. Though unlike the lumbering and aggressive Hulk that dwelled within Bruce, She-Hulk retained most of her personality. Over the years, she grew in popularity as she joined many of Marvel’s big name teams (The Avengers, Fantastic Four) and made her television debut in the eleventh episode of the short-lived Incredible Hulk animated series from 1982 to 1983. [1]

She-Hulk was originally planned to be part of The Death of the Incredible Hulk television film that was released in 1990, but she never made it into the final draft and ABC also announced the termination of plans for a potential She-Hulk series. Enter B-movie director Larry Cohen (It’s Alive, The Stuff) who was attached to direct a potential film based off the green superheroine. Signed on to play Jennifer Walters was Brigitte Nielsen; the lead role of Red Sonja and Sylvester Stallone’s former wife, who dressed up in a green fabric bodysuit with dyed hair and white pale make-up [aside from green lips and eyelids] for promotional shoots. [2]

While production got farther than most scrapped Marvel films, She-Hulk was cancelled and no reasons have ever been given as to why. Though it may have been due to the very low reputation of Marvel films that came out between the 1980’s-1990’s (i.e. Howard the Duck, The Punisher). No trailers or filmed material have ever surfaced, though the green costume she wore in promotional shoots went up for sale during the 2020 Icons and Legends of Hollywood auction. [3] And considering that half the items in that auction were identified as coming from Planet Hollywood’s collection, its possible that the company snagged up the costume after production was cancelled and displayed it in one of their now closed restaurants. The chance of another live-action She-Hulk production still lives on as an American web television series by Marvel Studios is set to premiere on Disney+ in 2022 with Tatiana Maslany slated as the lead role. [4] 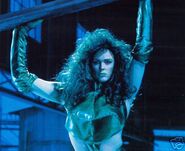 Retrieved from "https://lostmediaarchive.fandom.com/wiki/She-Hulk_(Cancelled_1990’s_Marvel_Film)?oldid=187965"
Community content is available under CC-BY-SA unless otherwise noted.