Before FUNimation Entertainment attempted to market Crayon Shin-chan in the US in 2006 (with their dub lasting three seasons), two previous attempts at English adaptations had been in existence.

The first dub, produced through 2001-2002 by Vitello Productions and Lacey Production, shortened the "Vitello dub". Shortened to just "Shin Chan" (as the later dubs would be), this version never aired in the US, but did air in the UK through 2002-2003 on their version of Fox Kids. The dub was later relegated to only shorts on Jetix, but the show was fully removed from the channel after Jetix rebranded to Disney XD. It also aired on Fox Kids and Fox8 Kids in Australia and on RTÉ 2 in the Republic of Ireland, Also airing in New Zealand with the channel currently being unknown, as well being subtitled in Iceland on Stoo 2 & in Israel on Arutz HaYaledim, This dub contained many famous voice actors that had done work in Western animation, such as Grey DeLisle (who had her first voice acting role in it). Although the dub was heavily censored and localized, Shin Chan's infamous Buri Buri dance was still in the show.

52 episodes that included 156 segments (episodes lasted 21 minutes and included 3 segments of 5 to 7 minutes) have been produced of the Vitello dub. 117 complete segments of the dub have been found in English, 23 segments have also been found (but we're either censored compared to the original dub or have recording issues or missing small pieces), 5 segments have partial recordings available in English, And 11 segments are currently completely missing. 60 segments of the Vitello dub were released on Region 4 (Australia) DVDs by Magna Pacific, but they are now all out of print. All DVDs have been found and uploaded.

In 2004, Phuuz Entertainment gained the license to the series and produced a new English adaptation, featuring a different pool of Los Angeles-based voice actors. None of this dub was ever released on DVD, and none segments have appeared on the internet. At least 78 episodes (234 segments) have been produced of the Phuuz dub, of 36 segments the English name is known. This dub was pitched to Adult Swim in 2005, but was rejected on basis of it sounding too "childish" for the block. After Phuuz's license expired, FUNimation acquired the rights and their dub was approved. A fourth English dub that was close to the original was commissioned by LUK Internacional in 2015 and released in 2016.

Fox Kids Europe and Jetix Europe Channels B.V. - a British and Dutch media company located in Hilversum (The Netherlands) and London (United Kingdom) - is a media company that oversaw the dubbing and distribution of European dubs based on the Vitello and Phuuz dubs. In 2003 the company was owned by The Walt Disney Company and to a lesser extent by a famous Dutch media tycoon.

The Danish, Dutch, French, German, Greek, Italian, Polish, Brazilian Portuguese, European Portuguese, and Latin American Spanish dubs of the series used the Vitello dub as the source for their dubbing. Of these the Italian and Polish dubs did not continue from the Phuuz dub afterwards. It is not known whether or not the Danish or Greek dubs continued, but the series proved to be popular worldwide.

Changes from the Japanese original

This are some examples of edits by Vitello.

This are some examples of edits by Phuuz.

The following episodes are available both as original Japanese version with English subtitles and as English Vitello dub:

These edits were done by Fox Kids and Jetix UK themselves and therefore didn't appear anywhere else.

Both dubs featured many name changes for the characters, although in some cases they used different options than what FUNimation would later use.

Segments of the Vitello dub

The order of episodes Vitello released them in is not in the chronological order aired in Japan, in episode 29 Shin brings his classmates to visit his newborn sister, episode 30 shows the baby coming home from her birth in the hospital and in episode 52 it was revealed that Shin was going to have a little sister.

All segments stated to be found from Fox Kids in the UK were uploaded to the Kametsu Forums, An account was required for access but the thread no longer exists, however they have been backed up, All segments stated to be found from Jetix in the UK are from the YouTube user "Shin Chan" who stated to be in the possession of 23 segments, The user however only posted 13 segments leaving the other 10 being lost, while 10 of the 13 segments are currently available in English, Episode 8a 8c & 17b were blocked by tv asahi and SHIN-EI ANIMATION and were never backed up (The user also stated that if the videos get deleted, he would create a Vimeo account and upload the segments there, but this never happened), The short version of Episode 11c (Driving With Mom), was found on a Jetix broadcast uploaded to archive.org by powerspyin1, Episode 30's recording from Fox8 Kids in Australia was uploaded to YouTube by GreenYoshi93 sometime in the Mid-2010's, However, The video was striked by tv asahi, Although it's been backed up, leaving just the commercials from the tape currently available as of today (it is not known if the user has another tape, but it is highly possible that its the same tape), On April 20th 2022, an Archive.org user named Philtype, posted about 16 full segments and one incomplete segment from RTÉ 2's Den from Ireland, As well as some alternate/uncensored recordings were uploaded by the same user on May 14th 2022.

Archive.org download of found segments prior to April 2022 (PAL) (missing 23b)/Episode 23b

Archive.org download of all segments from RTE 2's Den in Ireland (PAL)

7) I Get Recycled + Mom Killed The TV + Lucky Gets Lucky

9) We Go On Vacation + Vacation Fun + Dad Has A Breakdown

DVDs of the Vitello dub

The rating on this DVD is actually inaccurate; Shin Chan volume 2 received a "PG" by the Australian Classification Board for "Mature themes, Sexual references, Low level coarse language".

The DVD given away with Jetix Magazine issue 4 in the UK included episode 27.

The DVD given away with Jetix Magazine issue 5 in the UK included a part of episode 11a 'Let's Go Fishing' and a part of an another episode.

One of the three Fox Kids promo DVDs given away with the UK newspaper Daily Express on May 10, 2004 was a Shin Chan DVD with one episode of Shin Chan. 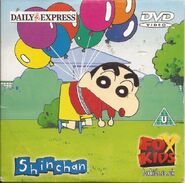 From November 17, to November 22, 2003 free Fox Kids promo DVDs were given away with UK newspaper The Sun. This included one Shin Chan DVD with episode 4 and 9. 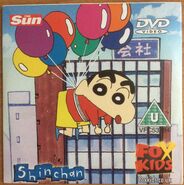 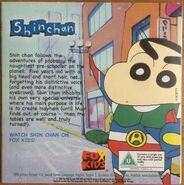 From September 11 to October 2, 2004 free Jetix on Fox Kids promo DVDs were given away with UK newspaper The Sun. This included one Shin Chan DVD with episode 13 and 28. 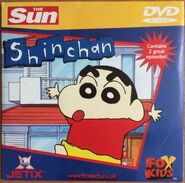 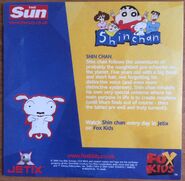 Segments of the Phuuz dub (LOST)

At least 52 episodes (156 segments) have been produced of the Phuuz dub. Of 147 segments the English name is known, the other segments names are from the German dub which was a translation of the Phuuz dub, While most people believed that Phuuz Entertainment dubbed a whopping 78 episodes, this isn't true, as Phuuz dubbed another 52 Episodes while some of the foreign dubs dubbed 78 episodes.

While there are no fragments of the Phuuz dub available in English, there are audio files available:

But if anyone as either full episodes or segments, please do upload...

The European Portugese dub (a translation of the Vitello dub and later the Phuuz dub) kept the title cards in English, therefore the English names of some missing fragments of the Phuuz dub are known.

The Sun Shin Chan Promo DVD 2003 download. This disc was also given out by Daily Express in 2004 with identical contents.

Danish Opening/Danish Credits/(Episodes will be available soon, in the mean time, only 1 clip in available in Danish) [Adapter D&D]

Australian Classification for the volume 1 DVD

Australian Classification for the volume 2 DVD

Australian Classification for the volume 3 DVD

Australian Classification for the volume 4 DVD

Australian Classification for the volume 5 DVD

Archived list of all episodes released on DVD in Australia

Fox Kids Teams Up With The Sun For Cartoon Promotion

Thanks to Umjammerlammy, GreenYoshi93, Anon316, Ecio, Sunstorm, Arian, PannenkoekenNL and others that are forgotten for their contributions to this search.