Sister Sonic is a cancelled role-playing video game in the Sonic the Hedgehog series. The game was set to be developed by Sega Falcom and was to be released on the Sega CD (Mega CD in Japan and Europe). Sister Sonic was going to be an American localization of the Japanese PC game Popful Mail, with the cast of characters being replaced with Sonic characters and was to introduce Sonic's long lost sister. In 1993, gaming magazine Electronic Gaming Monthly reported on a rumor of a new RPG game in the Sonic the Hedgehog series titled Sister Sonic and was possibly going to be unveiled at the Toy Fair in June of that year. Despite the report, Sister Sonic was not shown at the 1993 Toy Fair.

Upon hearing reports of the game's existence, fans sent many angry letters to Sega Falcom, urging the developers to not change the game and release it in its original, unaltered state. Due to the overwhelming negative feedback, the game was delayed and eventually cancelled. Sega later released an unchanged English port of Popful Mail for the Sega CD in 1995.

No screenshots or videos of Sister Sonic have ever been released and it's unknown how much progress the game had made before it was cancelled. In issue #49, Electronic Gaming Monthly stated that the whole scenario was a great example of the power of consumer's ability to directly influence a video game company's decisions. Had it been released, it would have been the first ever role-playing Sonic game. A Sonic RPG game was finally released in 2008 titled Sonic Chronicles: The Dark Brotherhood.

June 1993 EGM article mentioning Sister Sonic and its possible reveal at the Toy Fair that month.

August 1993 EGM article stating that the game was not at the Toy Fair in June. 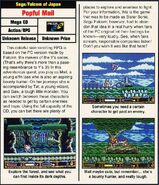 October 1993 EGM preview of Popful Mail with a brief mention of Sister Sonic.
Community content is available under CC-BY-SA unless otherwise noted.
Advertisement