View source
watch 01:43
DC Fandome - The Loop
Do you like this video?
Play Sound

Socks the Cat Rocks the Hill

Cover of the game.

Socks the Cat Rocks the Hill is an unreleased 1993 SNES/Sega Genesis video game that starred a cartoon, fictionalized version of Bill Clinton's famous pet cat, Socks. A Genesis version was going to be completely different game than the SNES version. Although the game was fully developed and featured in ads and game expositions, its release was cancelled. Reasons are unknown, although it has been speculated that it was due to the political satire inside the game that would not have been particularly audience-friendly (although former staff denied that, and said it was because the publisher went down).

According to magazine articles, the game was about Socks who had to fight foreign spies invading the White House to steal nuclear plans, and so he would go through several levels to fight enemies such as rats in trenchcoats. Bosses were allegedly based on real-life American politicians, including Ross Perot, Richard Nixon, and a Jimmy Carter stand-in with a "smile attack".

Only one prototype cartridge of the SNES version has been known to still exist: it ended up in the possession of Jason Wilson, aka DreamTR, an avid collector of video games and owner of a video arcade. However, he refused to make its ROM available to the public ("dump it"), as it would undermine the value of the cartridge (although he kept a duplicate of the ROM).

Aware of its uniqueness, DreamTR had a friend upload an (intentionally) blurry, poor-quality five-minute video of the game being played on a TV. He and his friend admitted they did it in order to "troll" retrogamers who would wish to play it. Expectedly, they got flooded with countless requests that he'd dump the ROM, some of them being extremely agressive, even bordering on death threats.

In a forum on NintendoAge, DreamTR explained how he refused to dump the ROM, but that he would sell the prototype cartridge it for a minimum of 5000 $, or exchange it for either a Medieval Madness pinball machine or a (NES) Stadium Events original box with manual (either of those is worth at least 5000$). A fellow forumer, MinusWorlds, ended up buying the cartridge and promised that he would release it to the public in the near future, but in the form of boxed reproduction cartridges.

The game was developed as "Socks the Cat Rocks the House". 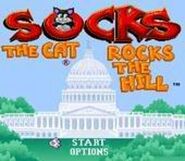 A advertisement for the game.

No prototypes of the Sega Genesis version have resurfaced.

http://blog.pricecharting.com/2009/07/interview-rare-game-collector-with.html Interview with DreamTR, when he held the prototype catridge.