Solstice 2 (Known in America and Europe as Equinox) was a video game developed by Sony and published for the SNES and Super Famicom.

This was developed most likely in early 1993. Not much is known about the beta version of this game, except differences in the ghosts and the main protagonist Glendall looks different. 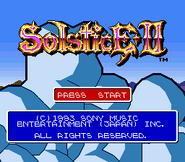 The title screen for Solstice 2.
Add a photo to this gallery
.
Retrieved from "https://lostmediaarchive.fandom.com/wiki/Solstice_2_SNES(Beta/Prototype)?oldid=62333"
Community content is available under CC-BY-SA unless otherwise noted.