SpongeBob's Truth or Square is an arcade party game developed by Sarbakan and published by Valusoft for the Nick Arcade service. The game is based on the episode of the same name, and was released on October 26, 2009, the date that the video game of the same name was also released. However, the two games were different in many ways.

The game used to be up on Shockwave and Nick Arcade, however, Shockwave removed it, and Nick Arcade was shut down later that year (it may have been the last game uploaded to the site). Resulting in the game disappearing. However, on July 22, 2015 a Wiki user by the name of Mister burt, posted a link to a download of the game's demo that apparently worked, however, the demo no longer be downloaded. Causing it to become lost once again.

After being entrusted by Mr. Krabs to keep the Krabby Patty formula safe, SpongeBob is overcome with grief for losing the recipe. He then relies on the help of the most unlikely companion, Plankton, who wants the secret Krabby Patty recipe for himself. With the help of his friends, SpongeBob must use Plankton's memory machine to retrace the happiest moments of his life to find the Krabby Patty formula in time for the Krusty Krab's Eleventy-Seventh Anniversary.

The game is a puzzle game, and the main objective of the game is to place down vents for characters to climb through. Another objective is to find cards of SpongeBob's happiest moments. There are also a few minigames in the game as well. 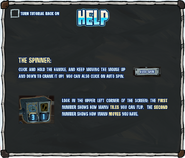 The "Reset" button; which removes obstacles.

One of the games's "Happy Moment" cards. 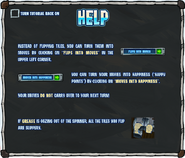 Loading Screen for the Nick Arcade game Truth Or Square
Add a photo to this gallery
Retrieved from "https://lostmediaarchive.fandom.com/wiki/SpongeBob%27s_Truth_or_Square_(2009_Nick_Arcade_game)?oldid=123411"
Community content is available under CC-BY-SA unless otherwise noted.