Start a Wiki
watch 01:50
The Loop (TV)
Do you like this video?
Star Wars Episode I: The Phantom Menace was the first prequel from the Star Wars franchise where it was released on 1999, later there are some scenes are been deleted that can be found on DVD and Blu-Ray releases (with two in particular partially reincorporated into the film, and one deleted from the theatrical release reincorporated in its entirety) but their are other scenes are been never been used on the project where it was lost. 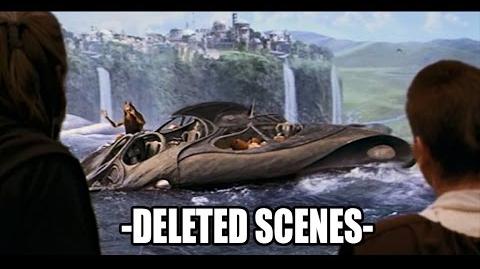 Star Wars The Phantom Menace - Deleted Scenes 1080p HD
An deleted scenes are founded on DVD release.
Add a photo to this gallery

The extended scene of the podrace in first and second laps.

Anakin says farewell to Jira.
Add a photo to this gallery
Retrieved from "https://lostmediaarchive.fandom.com/wiki/Star_Wars:_The_Phantom_Menace_(Lost_Scenes,_1999)?oldid=98720"
Community content is available under CC-BY-SA unless otherwise noted.