Start a Wiki
watch 01:51
The Loop (TV)
Do you like this video?
Ed Wood was one of the legendary "terrible" film directors. He has been lovingly dubbed as one of the worst of all time. What sets Wood apart from many other directors who have allegedly made bad movies is that Wood's have a certain charm and passion to them that make them impossible to hate, no matter how poorly they are made. His most famous film is Plan 9 From Outer Space.

Wood was always in a fledging financial state. He would have to constantly take out loans in order to make his films. Because of this, many of his films are pornographic or exploitation films in order to make a cheap buck. Take It Out In Trade is one of the former. The film centered around a couple searching for their daughter and the discovery that she now resides in a harem. Many softcore sex scenes ensue, as well as a scene that had implied incest (at least according to some of the people who remember seeing it).

The film is now widely believed to be lost. No copies have been shown since it's original theatrical run, which was limited at best. Even when Ed Wood's movies were reaching a new state of appreciation, this film could not be found for home release. This has left many Wood fans sad. What strangely does survive, however, were 3 reels of outtakes, behind the scenes footage, and deleted scenes that were rediscovered in 1995. The outtakes were gathered together and released on a 1995 VHS from Something Weird Video. 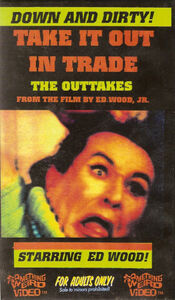 1995 VHS release of then-recently rediscovered outtakes from the film. 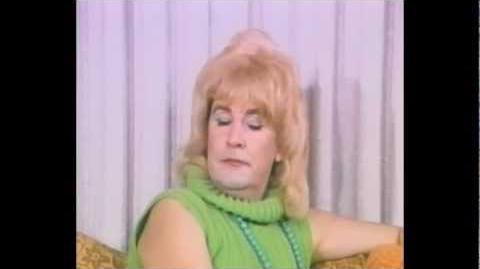