Talking Caillou was an app created by My Talking Toys in 2013,

There was a game where you can find animals on Caillou's train, Guess what Caillou is pretending to be.

It was made by Talking Toys

An APK of the app is found. https://www.youtube.com/watch?v=1aMfaR7HnjA

Here is a Screenshot of the gameplay; 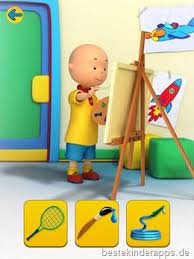