NOTE: The 2015 version of this app is found as an apk file, Which these files can harm your device, So, Be careful.

Talking Patrick Star (in 2015 and 2016 as Talking Hilarious Star by a different developer, using the Unity engine) was a former Talking app that was like all the Talking apps, But with Patrick Star. It also had used the backgrounds from SpongeBob SquarePants. It was deleted probably because of copyright issues by Viacom or even the various creators deleted it. Their were 2 versions of this app.

Talking Patrick star is your new interactive best friend. From Bikini Bottom to your Screen, Patrick repeats anything you say with their own hilarious voice, laugh, shaking and talking, with over 150 exclusive sounds the fun is guaranteed.

You have a lot of free time with nothing to do? You just love to shoot a funny video? Fan of Patrick? We have great news for you! Cool game from our developers "Talking Patrick Star" will fulfill all your secret desires! Favorite character - thick starfish Patrick of the famous cartoon "SpongeBob" in your phone! He can not just keep the conversation going - but change into a different outfit, sing a song, play soccer, and much more!

This game is for you, if you want to:

You want to have a hilarious sidekick in a cyst in the vacuity which will talk to you, and you'll be converse to him! You will be surprised, because we have created an application that will show you a unique conversation with starfish Patrick! Become a sidekick of his, who had been in a cyst under vacuity, and it will be very cheerful, because you will be able to converse and listen to the counsel of Patrick Star underwater! You'll be an excellent conversationalist who can play with Patrick, have fun, listen to his stories and anecdotes and learn all its secrets! Become a new hilarious sidekick in a cyst under the vacuity, which will be talking on various topics, and receive counsel from the starfish Patrick!

Meet with a representative of the ocean!

- Talk to a real hero on various topics!

- He will tell you hundreds of stories, from which you will laugh! 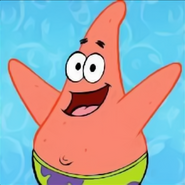 A screenshot of the original 2010 iOS version, which is lost.

The last icon for the 2014 version, when it was remade for Android by a different developer.

Another screenshot of the 2010 iOS version, which is lost.

Patrick laughing in the 2010 iOS version.

Patrick in the 2014-2016 Android versions which was made by a different developer.

Another picture of Patrick working out in the 2014-2016 Android version.