The Animated Backyardigans Pilot is the successor to Me and My Friends, the first Backyardigans pilot before Nickelodeon picked it up in 2001.

This pilot marks the first time The Backyardigans was animated in CGI rather than people in bodysuits. No plotline is known, due to it never being released to the public. However, a small bit of the episode was leaked on the internet. Tasha was not present in the episode. 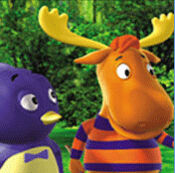 Character designs for the pilot *Note that Tasha appears, despite the fact she's not in the episode.*

Credits To : Netoweto05
Add a photo to this gallery

Retrieved from "https://lostmediaarchive.fandom.com/wiki/The_Backyardigans_(lost_Pilot_Episode;_2000%E2%80%99s)?oldid=138151"
Community content is available under CC-BY-SA unless otherwise noted.