The Brady Bunch Visits ABC is a September 1971 special in which the kids from the classic sitcom The Brady Bunch visit ABC-TV studios and preview the then-new Saturday Morning Cartoons on ABC the Friday night before their premiere the next morning. Up until the mid 90's, the big 3 television networks often did this, till most ended showing animated cartoons on Saturday morning.

In the special, the six Brady kids, in-character, are dropped off by Mike and Carol Brady and begin their tour while hearing about the new crop of cartoons. In their travels, they meet the creatures from the worlds of Sid & Marty Krofft, and even The Jackson 5, promoting their new cartoon adventures. A year later, the Brady Kids themselves would join the animated line-up. With a lot of 'trippiness' common for the era, the ending even relied on the classic/infamous ending 'It was all just a dream...or was it?'.

The special was broadcast well before the common availability of home video recording. Its unique nature means it was of course never rerun, since these cartoons could only be new once. Also at play is a host of rights and residual payment problems, with featured characters and cartoons being the property of several different studios, perhaps precluding its inclusion on Brady-themed DVDs.

Several parties might have a copy of this somewhere, from the cast and crew of The Brady Bunch, the estates of the late Sherwood Schwartz or Michael Jackson (said by some to be obsessed with his childhood), Sid & Marty Krofft and their employees, or employees of ABC-TV or its affiliates. On the other hand, it is almost purely a novelty, a dated one at that, and keeping it around may never have been a priority. At this point, even the network practices and programming policies that drove this special are no longer in vogue.

ABC would later produce another Brady Bunch-based Saturday morning cartoons preview called The Brady Bunch Meet ABC's Saturday Superstars which was aired a year later. This was partly to preview the cartoon spin-off, The Brady Kids, which premiered on the ABC Saturday Superstar Movie before premiering as its own show. 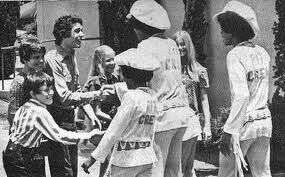 Photo of the Brady kids meeting The Jackson 5 during the special. 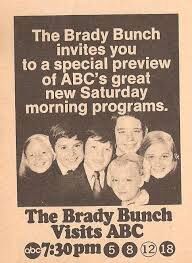 Advertisement for the special.
Community content is available under CC-BY-SA unless otherwise noted.
Advertisement