Don Bluth's 1988 animated feature film The Land Before Time was originally to have a running length of 80-82 minutes,[1] but was cut down to 69 minutes, due to the removal of various scenes that were deemed either too frightening or too difficult for children to understand (plus a few other minor cuts that happened for unknown reasons).

Against Bluth's wishes, a grand total of 19 fully animated scenes were cut from the film before release, namely scenes in which potentially overwhelming images from the encounter with Sharptooth (the Tyrannosaurus rex) were shown, such as close ups of him attacking out of nowhere, and (though possibly just a rumor) a scene of Sharptooth ripping open the back of Littlefoot's mother (which was altered to show the event only in shadow). The theory that the early release tape contained some cut footage seems to have been proven false.[2]

In addition to these scenes, the ending was also altered. Originally, Littlefoot was to find the Great Valley on his own after parting with his friends, before returning to his friends and helping them defeat Sharptooth, later entering the Valley with his reunited group. Other scenes cut from the film included one in which Ducky is seen taunting Sharptooth by making faces at him, and one that shows the inclusion of Spike into the gang and the decision to lead him using berries. The rumored scene in which the main characters come upon an oasis inhabited by fat "crown-heads" (Pachycephalosaurus) and "gray-noses" (Saurolophus), who refuse to share food and water with one another, giving Cera an epiphany on not judging others based on their species was rumored to be part of the film, but was never actually animated.

Small snippets from some of the deleted scenes can also be found in pieces of promotional material for the movie that came out before its release. It is rumored that an unedited copy of the film was accidentally sent to a Finnish broadcasting company, which they then subsequently aired, although this claim has never been verified.

The original cut of The Land Before Time has never shown up in any form of public release, and it is largely believed that the extra footage has been either lost or destroyed. Despite this, stills from some of the deleted scenes have shown up in the past, some, interestingly enough, in the movie's counterpart storybooks Friends in Need, The Search for the Great Valley, and The Land Before Time: The Illustrated Story. Also, another Don Bluth-directed film, All Dogs Go To Heaven, had cut scenes that were found in 2016, leading fans to believe that the cut scenes for The Land Before Time may show up in the future and are not truly lost.

Attempts are being made to contact people who worked on the film. Some members of the Gang of Five (the biggest Land Before Time forum to date) have asked Mark Pudleiner, Dick Zondag (animation director), and Stu Krieger about information.

New information was discovered on 06/23/2017 from Mark Pudleiner, who asked producer Gary Goldman for information.

I asked the one of the owners and producer Gary Goldman.
This is his reply.
- Mark
"Though it was approved at the storyboard stage. It was at a screening in April or May of 1988 just 6 months before completion of the film at a a 20th Century Fox theater in Soho Square, London, with just Don, John, me, Steven and his first wife and George in one of the small 30 seat theaters. The problem is that when it was edited, cutting 19 scenes out - including audio, by one of Steven’s favorite editors at Pinewood Studios in England, it was mainly the T-Rex shots (scenes to me) of full head shots with wide open mouths, attacking into the lens of the camera at the child dinosaurs as they took cover in the briars. However, it was less than a minute lost sections of the T-Rex attack and the kids. Steven and George both felt that those scenes would have triggered an audience of 4 and 5 year olds crying and having their mothers and fathers holding them in their arms in the lobby waiting for a safe time to take their kids back to their seats. Those cuts remained, the tiny short cuts were taped together and rolled and we took them back to Dublin. However, we never saved the prints or the negatives for those scenes, all were animated and cleaned up, many of which were in color.
The additional 10+ minutes of cuts came after we finished the film. Steven and the same editor, who had been fast-tracked to get a green card, to move to Burbank and work with Spielberg there at Amblin on the Universal lot on other projects. Steven continued to edit the film to be sure it would not disturb parents or their children. I believe we delivered an 80 to 82 minute film including all credits. The final edited length was 69 minutes, the same as Bambi (1942).
Best,
Gary "

Though it was said that the scenes were not saved, the same was said for the cut scenes of All Dogs Go to Heaven, but the uncut hell scene was found in the summer of 2016.

When the movie was first screened, it seems it wasn't yet scored, since there are a number of scenes that simply don't fit into the music. Other scenes were removed after it was scored, which is why there are chunks in the music that are missing, like in The Black Cauldron, though normally not to as great of an extent. The second edit is much more major than the other two.

The Third Edit (after the soundtrack was created)

Cel of Littlefoot and Cera running away from the Sharptooth, from "The Search for the Great Valley" book.

Littlefoot seeing the Great Valley for the first time.

Script of the original film, surfaced in early February 2018.

Another cut scene in which Cera eats flowers and doesn't let Ducky have any, perhaps during the If We Hold On Together montage. 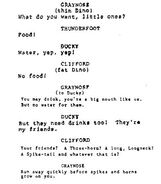 The crownhead named Clifford. This is also proof of the Oasis scene being in the film 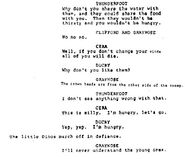 A never-before-seen cut scene of Littlefoot arguing with Cera

the scene where Littlefoot, Ducky, Petrie and Spike plan to kill Sharptooth, though most of the content of this image was cut as it tied to the original ending (such as Littlefoot explaining to them that they must kill Sharptooth before entering the Valley)

A newly found cut scene of Cera introducing Littlefoot to her father.

A newly discovered cut moment at the very end, possibly a shot after "Now we'll always be together", which also got cut too.
Add a photo to this gallery

The full script of the film can be downloaded at this link: https://drive.google.com/file/d/194ERbXiImSdBJJRfn96ZVxJS0Txsr04T/view

The original story board drawings for the Sharptooth chase scene, showing just how much it was changed[3] [4][5]

Retrieved from "https://lostmediaarchive.fandom.com/wiki/The_Land_Before_Time_(Original_Uncut_Version)?oldid=133540"
Community content is available under CC-BY-SA unless otherwise noted.