Start a Wiki
watch 01:51
The Loop (TV)
Do you like this video?
The Lone Cuke (original French title: Le Concombre Masqué, "The Masked Cucumber") was meant to be a CGI-animated TV series adaptation of French comic series Le Concombre Masqué by Nikita Mandryka. It would have been 52 episodes, each 6.30 minutes long. Its original release date were to be in late 1993.

The original series is quite popular for its wacky, surrealistic and absurdic humor; it centers on the adventures of an anthropomorphic cucumber wearing a black mask (the title character), living inside a metallic castle called a Cactus-Blockhaus, set in the Desert of The End of the World. The Lone Cuke has a best friend, Chourave, an anthropomorphic turnip. Together, they would face disasters such as a spider living inside Cuke's head, sentient clouds invading the Cactus-Blockhaus or poker-playing elephants. Cuke has famous catchphrases such as "G." or "Bretzel Liquide!".

On September 2nd of 1992, issue 2838 of Belgian comic book magazine Spirou Magaziiiine (now known just as Spirou) made an article about the creations of a CGI-animated TV series based on Le Concombre Masqué, with a 3D-rendered Cuke on the cover.

The magazine told about how the comic book was going to be made into the TV series, being animated by a young Belgian animation society, Neurones Cartoon, based in the city of Liège. The intended 52 episodes would have been based on the three first comic albums. Mandryka himself came to the studio for three months to work on the first episode, helping with the storyboard and character designs.

In contrast, the backgrounds and special effects were mainly rendered in 2D.

A July 1992 article claims The Lone Cuke had been officially selected for Chicago's SIGGRAPH (Special Interest Group in GRAPHics) convention, that focuses on computer programming and graphics.

Virtually no mention of the series has been made since then; no footage of it has ever resurfaced and not even the official website makes any mention of it. Online, some animator's resumes and newspaper archives talk about it, along with its probably intended English title, The Lone Cuke.

The Computer History Museum in California seems to hold a SIGGRAPH Video Review tape, mentioning The Lone Cuke in its contents.

Rendering of the alarm clock character; from magazine. 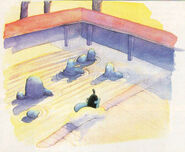 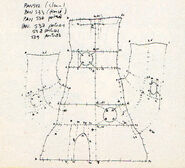 Design sheet for the Cactus-Blockhaus.
Add a photo to this gallery

A short 30-second clip can be seen on YouTube.

Retrieved from "https://lostmediaarchive.fandom.com/wiki/The_Lone_Cuke_(Early_1990s_CGI_Series)?oldid=114970"
Community content is available under CC-BY-SA unless otherwise noted.