The Long and Winding Road (The Unreleased Official Beatles Documentary)

The Long and Winding Road was the title of a proposed documentary by long-time Beatles insider Neil Aspinall. The original concept was a documentary that was to be the first official account of the band's career, told from the prospective of the group via use of interview and archival footage.

During The Beatles' career

The project's beginnings date back to 1968, when head of Apple Films, Denis O'Dell began began contacting television stations, film and newsreel companies for footage of the band. That same year, the group had authorised writer Hunter Davis to write the group's official biography. The band themselves (reportedly not happy with the final book), would release their own version as a proposed documentary from The Beatles themselves.

Work on the film continued into 1970. In February, The New York Times reported that as with their upcoming film Let It Be was the biographical documentary titled The Long and Winding Road. At this time, Apple Manager Neil Aspinall was in charge of the film. Working with researcher Nell Burley, Aspinall continued work on the film during 1970, eventually producing a rough work print.

After The Beatles' Break-up

On April 10, 1970, Paul McCartney officially announced to the press that he was leaving the group. This, however did not stop any further work on The Long and Winding Road film. Shortly after McCartney's announcement, Apple continued to promote the film. Now stating that the documentary would be shown in the split screen format, much like the recently successful Woodstock movie, Apple said the film would be in cinemas by Christmas 1970. The October 1970 issue of Beatles Book Monthly (the group's official fan magazine), would also report that Aspinall was close to completing the film and still cited a Christmas release date. However, the film did not make the Christmas season release as it would be tangled up in the group's legal battles in late 1970. During which, McCartney had stated in court that he would have no further involvement with the project. Aspinall had no choice but to shelf the project until the band's legal issues were resolved.

In 1972, Apple announced that production on the film had resumed and it was now titled: Ten Years in the Life of the Beatles. The film's production would continue through-out the 1970's. John Lennon also mentioned the film was still in production during an interview on the Today Show in 1974.

The late 70's saw The Beatles enjoy a resurgence of popularity. EMI releasing new compilation albums and a live album of their Hollywood Bowl performances. When Eric Idle was producing his 1978 Beatles parody special The Rutles: All You Need Is Cash, George Harrison (a good friend of Idle's) lent a videotape copy of Aspinall's work print to Idle for research. Scenes from The Rutles film included footage identical to Dezo Hoffman's 8mm movies of the group from 1963. The public would not see the Beatles version of this footage until 1980.

Also banking on the Beatles popularity, a Broadway musical called “Beatlemania” which opened May, 1976.  The Beatles did not approve of the performance and on November 28, 1980, John Lennon wrote a legal statement using the unreleased documentary as a reason for the production to cease.  His statement read:,

“I and the other three former Beatles have plans to stage a reunion concert, an event to be filmed and included as the finale to “The Long and Winding Road,”  the official Beatles produced documentary that is to be released in the mid-1980’s.”

Sadly, ten days after writing that statement, John Lennon was murdered, putting a tragically unexpected end to any chance of a reunion of the four Beatles. His statement was read in court in June 7, 1986, the producers of “Beatlemania” had to pay Apple $10.5 million for using the Beatles’ songs and likeness during that period. According to Yoko Ono, the reunion concert would have happened in England:

"Just days before his brutal death, John was making plans to go to England for a triumphant Beatles reunion. His greatest dream was to recreate the musical magic of the early years with Paul, George and Ringo … (he) felt that they had traveled different paths for long enough. He felt they had grown up and were mature enough to try writing and recording new songs." - Yoko Ono

Lennon's death brought put plans of the films release on hold indefinitely. It wasn't until 1992 when the project was rebooted from starch as The Beatles Anthology TV series.

For decades, fans of The Beatles had longed to see any video from The Long and Winding Road. In 2015, bootleg label HMC released, via their TMOQ Gazette series, a DVD of what appeared to be from a videotape copy of Neil Aspinall's work print.

This version of the film was compiled of existing archival footage with no new interviews, no narration, but the optical spilt screen effects mentioned in interviews. There is no opening or closing credits or titles, instead the closing credits of The Beatles' Magical Mystery Tour film as a place holder. 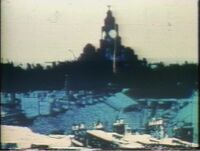 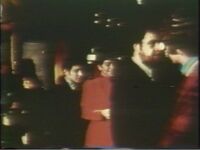