The Primevals is an incomplete science fiction/fantasy film directed by David Allen. The plot for the story is vague, but it's known to involve time travel, Eskimos, yetis, robots, and giant lizards. The film combined live action with stop motion animation.

Allen first began pitching the project to the British Hammer Films studio in the late 60's. In 1978, Allen, along with producer Charles Band, began production on the film.[1][2] However, the finances for the movie fell through, and the project started and stopped several times before grinding to a halt. Then, in 1994, a new source of funding was secured, and production restarted. Principal filming of the live action scenes were completed in Romania with a new cast, and Allen continued to work on the post production and stop motion effects until his untimely death in 1999.

The film was in limbo at that time, and, although colleagues of Allen's have vowed to complete the film based on his storyboards, financial difficulties have once again stalled the production. The only footage that has surfaced from the project is a few early wip scenes and approximately 21 seconds of the workprint.

On November 15, 2017, Charles Band stated he and Full Moon are working on the possibility of an official release. [3] On August 4th 2018, Full Moon confirmed that the film will finally be completed and released in 2019.[4]

A Yeti and Lizardman 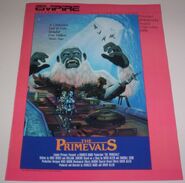 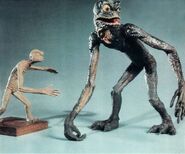 more Lizardmen
Add a photo to this gallery

Retrieved from "https://lostmediaarchive.fandom.com/wiki/The_Primevals_(Unfinished_1978-1999_Science_Fiction_Film)?oldid=122735"
Community content is available under CC-BY-SA unless otherwise noted.