In 2006, the Wiggles recorded a song to promote ABC for Kids called ABC Kids. It was later uploaded on YouTube by a user but was eventually deleted. What's more, is that the song was re-recorded as "Wiggle and Learn". There were also other clips that appeared on ABC for Kids and featured The Wiggles.

UPDATE As June 21, 2020 The ABC for Kids song have been founded by Joseph Marshall. Special Thanks to this user. 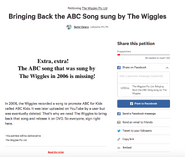 Daniel Celano's petition of bringing the Wiggles' ABC for Kids song back.

Quotes from The Wiggles' ABC for Kids idents