Before The Wiggles' TV show premiered in Australia, two clips were shown on TV in 1998. They are the 1997 video of "Romp Bomp a Stomp", which is different from the ones shown on "Wake Up Jeff!", "Wiggledance!" and "The Wiggles Movie" and "The Balloon Chase". For some reason, these two clips never appeared on TV in Australia again, although some clips were shown in the show's opening. However one of them, the 1997 version of Romp Bomp a Stomp, was uploaded to YouTube in 2008 but it was eventually deleted. It was re-uploaded in 2012 but re-deleted. Some people in Australia say that they're actually ads of TV Series 1.

Guillermo's rumor of the song 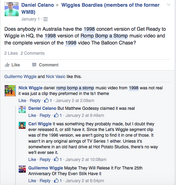 The song's rumor
Add a photo to this gallery
Retrieved from "https://lostmediaarchive.fandom.com/wiki/The_Wiggles:_Pre-TV_Series_Clips?oldid=158249"
Community content is available under CC-BY-SA unless otherwise noted.