Regarded as the most viewed film in history, The Wizard of Oz needs no introduction. It is a 1939 American musical fantasy film produced by Metro-Goldwyn-Mayer (MGM), directed by Victor Fleming and (an uncredited) King Vidor. Produced by Mervyn LeRoy, the film stars Judy Garland, Frank Morgan, Ray Bolger, Bert Lahr, Jack Haley, Billie Burke, and Margaret Hamilton, and was written by Noel Langley, Florence Ryerson, and Edgar Allan Woolf with songs by Harold Arlen and E. Y. "Yip" Harburg.

Although it remains the most famous and successful adaptation of L. Frank Baum's The Wonderful Wizard of Oz to this day, production was a bit of a nightmare. With a total of five directors, a plethora of footage was shot that was either scrapped or cut out of the film after preview showings.

In July 1938, MGM announced that they had tapped director Norman Taurog, who had a reputation of guiding young performers, to helm their upcoming film adaptation of The Wonderful Wizard of Oz. Working on the film during the extensive wardrobe and makeup tests for the summer of 1938, Taurog was paid for three-days of directorial work for the project, most likely for test shots performed in July-August. During the first week of September, however, Taurog was reassigned to The Adventures of Huckleberry Finn, which would be released on Febuary 10, 1939, and replaced by Richard Thorpe.

Though some pictures from the set have survived, the test footage shot by Taurog is presumed lost.

After Taurog quit, MGM brought in director Richard Thorpe to work on the film. According to the book The Wizard of Oz: The Official 50th Anniversary Pictorial History, Thorpe "had a reputation for bringing in pictures on budget and on schedule, which must have been a real attraction as the studio watched preproduction costs mount on The Wizard of Oz."

On October 13, filming began on the MGM Studios lot, and continued for a total of nine days. The scenes filmed included Dorothy and the Scarecrow's first encounter in the cornfield and various sequences in the Wicked Witch's castle. After an on-set mishap caused the production to shut down, producer Mervyn LeRoy reviewed Thorpe's footage and decided that it lacked the childlike wonder and innocence the production needed, and that Thorpe was rushing the production. Thorpe was subsequently fired. As a new director was saught out and hired, director George Cukor took over while waiting for his next film, Gone With the Wind, to begin filming. Staying with the film for less for a week, he was brough on to help shape the film.

All footage from his reign was scrapped, and like the Taurog footage, is presumed to be lost. Two notable aspects of the Thorpe footage include...

Under Thorpe's reign as director, the makeup and costume designs for Dorothy, the Scarecrow, and the Wicked Witch differed from what they would be in the final film. Though subsequent changes to the Witch's and the Scarecrow would be fairly minor, Dorothy proved to be another story.

Under studio direction, Garland wore a long, blonde wig, heavy, "baby-doll" makeup, and a blue cotton pinafore with a blue poka-dot border, and directed to be played in an exaggerated fashion.

After Thorpe was taken off the production, Cukor had her makeup and wardrobe altered, and gave her a more naturalistic look. He also told Garland to play Dorothy more down-to-earth, to remember that she was "just a little girl from Kansas."

Originally cast as the Tin-Man was MGM contract player MGM Buddy Ebsen. After he recorded all of his songs as the Tin Man, he started filming. However, on the Tenth day of filming, he left production because of an allergic reaction to the aluminum dust used in the Tin Man makeup. One of his songs recorded as the Tin Man, "If I Only Had a Heart", still survives and is included on the 2-CD Deluxe Edition of the film's soundtrack of 1995. Apart from that, no full footage of Ebsen as the Tin Man has ever been found or released.

Test screenings of the film began on June 5, 1939. The Film was 2 Hours Long and so cuts were made with the 3 Previews as templates, it's important to note that Over the Rainbow was nearly removed as the Studio felt it was too long and insulting to Judy Garland to sing in a Barnyard but the song remained and won the Oscar for Best New Song. The Deleted Scenes are seen as followed:

Ray Bolger, as a skilled dancer was given a extended dance number for If I Only Had A Brain it was choreographed by Busby Berkeley suiting Bolger's style of movement, however it was deemed too long by the Studio and was cut down. The scene was rediscovered in the 1980's and is seen below in the Gallery.

This scene is part of the most famous goofs of the film, when The Wicked Witch of the West sends her Flying Monkeys to get Dorothy and Toto she says:

"I've sent a little insect on ahead to take the fight out of them."

She is referring to the Jitterbug which was a Mosquito like creature that causes it's victims to dance. The scene is lost but the Sound Recording and Silent Home Movies of the Rehearsal also exist.

Over the Rainbow Reprise

After Dorothy is locked in the Witch's Tower, realising that she can't escape, she sings a little reprisal of Over the Rainbow but breaks down before she can finish it. Judy Garland had the song recorded live on set and had the Cast and Crew on set crying. The scene was removed and re shot but the melody of the song is used.

After the Witch is killed by Water, the Guard celebrate by singing a reprise of Ding Dong the Witch is Dead, the song also is sung by the people of Oz who create a parade as well for the heroes. The Number is seen very briefly in the Trailers from the 1949 re-release but if the scene survives any more that and the Audio is questionable.

Note: While The Jitterbug and the 2 reprises were Cut from the Film the songs appears in the Stage Musical Adaptations. 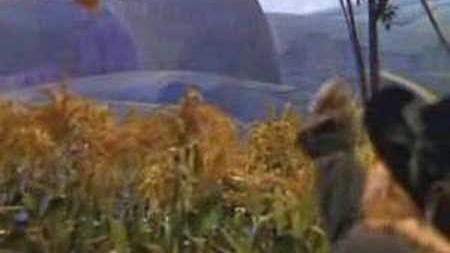 Wizard Of Oz - Scarecrow Dance (Deleated Scene)
One of the movie's deleted scenes. 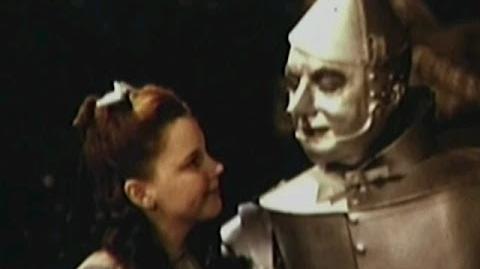 The over the rainbow reprise.

A still from the Ding Dong the Witch is dead reprise.

Add a photo to this gallery
Retrieved from "https://lostmediaarchive.fandom.com/wiki/The_Wizard_of_Oz_-_1939_Film_-_Unused_/_Deleted_Scenes?oldid=138832"
Community content is available under CC-BY-SA unless otherwise noted.