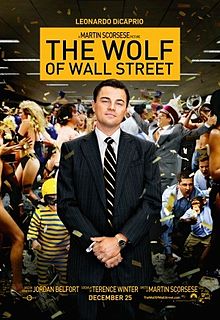 The Wolf Of Wall Street is a 2013 film by famed director Martin Scorcese. It starred Leonardo DiCaprio as real life stock broker criminal Jordan Belfort. It was nominated for the Academy Award for Best Picture, and appeared on many critics' best-of-2013 lists.

The film is infamous for its gratuitous nudity and sexual dialogue. Allegedly, the film had to be recut 4 times in order to get its rating dropped from NC-17 to an R. Even for an R-rated film, it pushes the envelope. For instance, there is a scene where DiCaprio's character blows cocaine into a prostitute's anus. Though not graphic, a scene like that on its own would push a film to NC-17. It is speculated that the movie got away with what it did because of Scorcese's stature in the film industry.

There have been rumored and confirmed reports of a 4-hour-long cut of the film that contained all of the debauchery that Scorcese wanted to be seen on screen. Unfortunately, only a handful of these missing scenes appeared on the home video release, and despite claims that the DVD would feature the full, unedited film, it only had the theatrical cut. This has left many curious as to what the film was going to feature. The cut hasn't even leaked online, and neither have any of the scenes in question. Time will tell if Scorcese's vision will one day be fully realized on the big screen. For now, we have the movie in its already hilarious theatrical cut.

Retrieved from "https://lostmediaarchive.fandom.com/wiki/The_Wolf_Of_Wall_Street_(Unreleased_2013_4-Hour_Cut)?oldid=42673"
Community content is available under CC-BY-SA unless otherwise noted.