In the late 1970's before the Railway Series books of Thomas & Friends were receiving the green light to be adapted into a televised form, a low-budget pilot episode was made and was pitched to several networks In April 3, 1982, the pilot was based of the story called Down The Mine from the eighth book from the Railway Series, Gordon the Blue Engine. The pilot was made by using fewer characters, fewer rolling stock, fewer sets and flatter lighting, which was very different to the aired episodes of Thomas & Friends.

The pilot was never really seen, no clips or screenshots of it are visible either, however, a shot from the twenty-fifth episode of the first season, Down The Mine, seems to be have been re-used from the pilot episode. When Thomas passes Knapford, his model appears to be much more simplistic than the one used in the series, the main differences being the paint on his front splasher appears to be missing the red lining, his side rods seem more toy-like in appearance and his face is different compared to the one used in the series. It is presumed that the photo of Thomas which was seen on a 1983 Hornby set was the original pilot model, an illustration from the Railway Series book, Branch Line Engines, was where Thomas' pilot model was based on.

Photos of Gordon's pilot model, by the model maker Christopher Noulton can be found in an interview by Sodor Island Fansite.[1] The pilot model of Gordon was apparently revamped for use as a stand-by model in the second season of Thomas & Friends. Eventually, it was dismantled and used as scrap set dressing for episodes such as "Toad Stands By", and "Thomas, Percy, And Old Slow Coach". 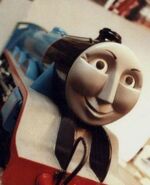 Thomas' presumed pilot model as seen on the 1985 Hornby set

The illustration where Thomas' pilot model was based on

Gordon's pilot model in Thomas and the Magic Railroad

Retrieved from "https://lostmediaarchive.fandom.com/wiki/Thomas_%26_Friends:_Down_the_Mine_(Unaired_Pilot)?oldid=120940"
Community content is available under CC-BY-SA unless otherwise noted.