Thomas And Friends is a British live-action/stop motion (Now CGI) kids television series that began in 1984 with the voice of Ringo Starr from The Beatles. The series about a cheeky little locomotive called Thomas and his friends on The Island of Sodor but there is a

Scottish Gaelic dub not very many people know about.

Series 8-9 were avaliable on Iplayer before the dub stopped airing in 2015 or 2017/2018 acording to User ScummiestoftheBoBs, since then only the outro has resurfaced but a Youtuber Known as "MadGaz85" Said there was a dub of Series 1 that probbaly aired in the late 80s early 90s on STV Grampian.

And he had a tape with some episodes on it and said the narrator was Donnie “Dòtaman“ Macleod.

The Series 8-9 Episodes will Likely Stay Lost Forever, however, on Youtube still exist a Scottish variant of the Engine Roll Call song.

A rare book of the season 1 dub has showed up on eBay..

if you if In the us buy the book and put it online! 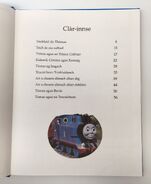 Add a photo to this gallery
Retrieved from "https://lostmediaarchive.fandom.com/wiki/Thomas_And_Friends_(Lost_Scottish_Gaelic_Dub)?oldid=166920"
Community content is available under CC-BY-SA unless otherwise noted.