Thomas The Tank Engine has had many video game adaptions on various consoles, many of these games have been released one way or another but one game went unreleased. This Game, named Thomas The Tank Engine and Friends was made for the original Playstation and was meant for a 1999 release. The game didn't get very far into production, according to the lead artist, David Tolley, There was just a few test demos made showing the graphics moving around. Only a few characters were known to be modelled, Thomas, Toby, Bertie and Terence 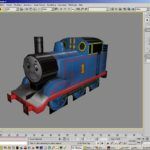 Retrieved from "https://lostmediaarchive.fandom.com/wiki/Thomas_The_Tank_Engine_and_Friends_(Cancelled_PS1_Game)?oldid=189483"
Community content is available under CC-BY-SA unless otherwise noted.