The 2000 movie Thomas and the Magic Railroad was a financial box office flop, with the prime reason being, among many others, the incoherent storyline that was in the final cut. In 2007, an interview with Britt Allcroft on Sodor Island Forums revealed that the movie was cut up against her wishes.[1] Her interview revealed that the cuts were due to the unnecessary complaints by American test audiences. The cuts were less than minor: the original cut was 110 minutes long, while the final movie was a mere 85 minutes.

A major character, 'P.T. Boomer', portrayed by Canadian actor Doug Lennox, was deemed too frightening for the younger audience and therefore was entirely cut out of the film before its release. Because of P.T. Boomer's absence from the final film, the plot elements that had been driven by him went unexplained.

P.T. Boomer is described in the original cut of the script as being "a drifter through choice" and was intended to be Burnett Stone's adversary, the real culprit responsible for why Lady went too fast and crashed, not Diesel 10 as altered in the final cut. Jealous of the relationship that Burnett had with Tasha (Lily's Grandmother), Boomer bullied Burnett into allowing him to take Lady for a run and crashing her in revenge. After the accident, Boomer fled Indian Valley and Burnett spent years trying to restore her to no avail. He returns now a good forty years later a bitter and dark character, hell-bent on completing his revenge by finding and destroying Lady for good.[2]

When audiences complained about him being "too scary" (a weird claim when the secondary villain is literally a Diesel with a claw) he was cut out at the last minute, explaining the laziness of the movie's final cut. This cut was so close to the release, that one of the previews even contained Boomer briefly, falling off the viaduct along with Diesel 10. Coloring books contained references to him by name as well.

Boomer was seen in the movie in the form of two cameos, part of his confrontation with Burnett is seen by a distance as Stacy and Lily arrive in their car. Audibly the scene is re-dubbed so that Burnett is giving directions to a lost biker. The biker clad in an overcoat presents a dark contrast and appears somewhat menacing. Boomer is also visible on the back of Diesel 10's cab during the chase scene toward the end (the original ending had Boomer land on the back of Diesel 10 through the magic buffers).

Because of the cuts, many key scenes that gave Britt Allcroft's original story substance and were filmed with Peter Fonda as Burnett Stone and Russell Means as Billy Twofeathers plus Cody McMains as Patch, were not in the released version because of the references to P.T. Boomer. The movie scenes with these cuts were either cut or altered. In addition, the test audience made the response that Means' role was hard to understand, Britt Allcroft found this shocking as he hardly was, and he "spoke with the voice of his history".[3]

Various theatrical and home media trailers of the movie had depicted characters with voices largely differing from their voices in the original cuts. During Production, it was widely publicized online that an Isle of Mann cab driver and Volunteer Firefighter named John Bellis was to be the voice of Thomas. Having only heard him utter a meager few words, Britt knew that John was the right man to voice Thomas himself, turning to tell her colleagues "I have just heard the voice of Thomas. The man is exactly how Thomas would sound!" A few days later, she offered John the part, and he accepted.[4]

Despite being flown out to Toronto record all of Thomas' dialogue, American test audiences however thought Bellis' voice made Thomas sound too old and thus John Bellis was canned. Thomas' voice was performed in the final cut by Canadian voice actor Eddie Glenn. Bellis was apparently disappointed by this, and to the point where he refuses to really discuss the matter with fans who have contacted him to ask him about it.

The same trailers depicted Diesel 10 with a gruff English upper class accent, as opposed to the New Jersey accent he had in the theatrical release. Sodor Island Forums ended up digging up the information that Diesel 10 was originally voiced by Australian voice actor Keith Scott. But this voice was deemed too frightening by the American test audiences. Canadian actor Neil Crone was then brought in to do the voice of Diesel 10, where he gave him a Russian accent. This too would fall in the hands when the audiences made the wild claim that it would somehow be "offensive" and Crone revised his voice to a New Jersey accent.

Britt Allcroft revealed that the original voice intended for James and Percy was Michael Angelis, narrator for the UK series of "Thomas" from 1991-2012. English actor Patrick Breen originally also provided the voices for Dodge and Splatter. Both of them were canned by the test audiences. Susan Roman and Linda Ballantyne replaced Angelis as James and Percy respectively, whilst Neil Crone and Kevin Frank replaced Breen.

What was also revealed is that Lily, 20 years later, was originally meant to be the narrator, as opposed to Mr. Conductor (Alec Baldwin) in the final cut. The whole movie was meant to be told by an Adult Lily and Patch (played by Robert Tinkler) to their child. A scene toward the end shows the family in a panning shot of the Pennsylvania fields. The movie also contained several flashback scenes of Young Burnett (Jared Wall) and Tasha (Laura Bower) which ended up being cut due to some involving P.T. Boomer. The scenes are only audibly heard in the movie through Burnett's imagination.

The only scene from the original cut that was made available commercially was included on the DVD release as an extra. This scene, called "Sundae Surprise" was insignificant, showing Mr. Conductor Junior relaxing and deciding to take one more sip from his Sundae, only to be splashed by it through the giant straw.

In February 2009, a YouTube user by the name of Jord87 uploaded the original chase scene with P.T. Boomer as what had been a dubbing project for the user's film class. However the scene was overdubbed with overbearing music from the 1998 movie Dark City as part of this dubbing project. Despite both reasonable and admittedly annoying requests from fans to upload the unedited scene, the user only responded with immature and mocking insults toward them.

The scene depicted showed Boomer being flung from the magic buffers and landing directly onto back of Diesel 10's cab, where he joins the pursuit of Lady and Burnett, and ends up falling off the viaduct with Diesel 10. The scene is slapped with a timecode and a watermark stating "Property of Destination No Unauthorized Duplication".

The scenes leak online is explained by the fact that a teacher at the Harris Institute in Toronto, Canada had worked on the movie, though only has access to the scene in question for educational purposes. He was tracked down by a forum user on Sodor Island Forums and got information that he was considering (as of March 2012) uploading the unaltered scene somewhere online. This has not happened however, but given that he is a teacher and has more important things to do, it's understandable he forget.

In 2013, another scene was discovered from a BBC AP Archive article from August 1999 featuring raw unused footage of a scene including P.T. Boomer (Doug Lennox). This scene in question is described in scripts as P.T. Boomer checking through a pile of 'Shining Times' newspapers. He stops at one - scribbled in the top corner are the words 'Burnett Stone - Muffle Mountain'. Boomer gives a satisfied smile as a young boy collects the pile of newspapers and cycles away.[5]

The film reel lies with the company vaults of Sony. Several petitions have been made urging Destination Films/Sony Films to release the workprint of the movie, all in jest. Britt Allcroft does what's in her power consistently to release what she can, were a workprint release possible, she would try to get it released. Part of the reason the workprint can't be released is that it contains a temp track, meaning music from other productions that are used to set the tone for composer reference. Even so, Thomas and the Magic Railroad was a box office flop, and if one were possible, it is unlikely it would get released anyhow.

Update: On July 21, 2014, new clips surfaced from a vine user from Japan uploading what sounds like an original trailer made for the movie before Boomer was cut. These were low quality recordings taken in front of the TV screen, and the trailer had Japanese subtitles imposed over the video. This showed three scenes with Boomer present. One of Boomer sitting on the mountainside while seemingly stating "I'll get my revenge" (The audio lacks clarity), one of him carrying explosives and one of the explosion he set off that sends Thomas off the mountainside.

A deleted scene of Burnett building a birdhouse can be found on "The Making of Thomas and the Magic Railroad" from the German DVD release.

On August 4, 2014, a higher quality version was uploaded by the Thomas archive channel TTTEArchives. The trailer was discovered to have been sourced from a Japanese Doraemon VHS. The trailer is in full English, but with Japanese subtitles.

Update (November 29, 2015) On November 28, 2015, P.T. Boomer's actor Doug Lennox passed away at the age of 77. In his memory, the original chase scene was uploaded to YouTube with the clear audio, and without the Dark City music.

The original was passed out to various people by a SiF user in June 2015, though with the intention of keeping it private in cooperation with the wishes of the Professor mentioned above. Unfortunately (or fortunately, depending on how you look at it) it was leaked out by one of those people it was passed to.

With the clear audio, it is revealed that the temp music for the score was music from the soundtrack of Stuart Little, composed by Alan Silvestri. 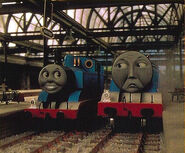 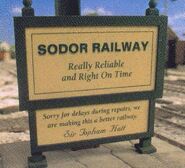 Burnett and Tasha when they were young

"One last sun ray and one last sip of a summer sundae. I think I'm a poet."

An explosion at Muffle Mountain

PT Boomer on top of Diesel 10

P.T. Boomer in sludge
Add a photo to this gallery

Retrieved from "https://lostmediaarchive.fandom.com/wiki/Thomas_and_the_Magic_Railroad_(1999_Director%27s_Cut)?oldid=62602"
Community content is available under CC-BY-SA unless otherwise noted.