Timon & Pumbaa in Stand by Me is a musical short film based on the Disney animated film The Lion King and the TV series Timon & Pumbaa. Timon sings Stand By Me along with three frogs while various unfortunate events keep happening to Pumbaa (Timon doesn't notice this). The short was released in theaters on December 22, 1995, attached to Walt Disney Pictures' Tom and Huck. It was also featured as a music video on selected VHS releases from Walt Disney Home Video in 1996, including A Kid in King Arthur's Court, and The Big Green and as well as being cropped to the full screen format as a sing-along segment in Disney Sing Along Songs: Topsy Turvy, and was eventually inserted as a short episode of Timon & Pumbaa. The theatrical version contained opening titles and end credits and was presumably preceded by the Walt Disney Pictures logo. While the Walt Disney Pictures logo has been removed from the short since its VHS, international DVD, and pre-2017 television printings (all of which remove its original titles and end credits, edit the opening scene to make it a music video, and zoom in at the very last scene), the original titles and end credits have been recently retained in current remastered printings, due to the entire Timon & Pumbaa TV series being remastered worldwide (with a widescreen version of each episode existing internationally). 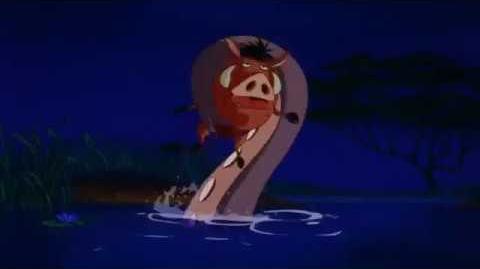 Тимон и Пумба - Будь со мной (RUS)
The Russian-dubbed version of the short with opening Russian titles and original English end credits
Add a photo to this gallery
Retrieved from "https://lostmediaarchive.fandom.com/wiki/Timon_%26_Pumbaa_in_Stand_By_Me_(Theatrical_Version)?oldid=151363"
Community content is available under CC-BY-SA unless otherwise noted.