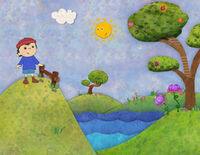 Tobi! is an Canadian-Australian children's short-form TV series that originally aired on Treehouse TV and Nickelodeon Australia for an short time in 2010. The show follows a young boy named Tobi who wishes to make his world an better place.

However, only 2 episodes are resurfaced "The Wall" and "No Place Like Home" online. While the other two, "The Beach" and "Tobi and the Bonkle" are lost. Plus, the series has never released on home video either.

On 2021, an animation test for Tobi was uploaded on Vimeo

Retrieved from "https://lostmediaarchive.fandom.com/wiki/Tobi!_(Lost_2010_TV_Series)?oldid=194370"
Community content is available under CC-BY-SA unless otherwise noted.