View source
watch 03:36
Wiki Targeted (Entertainment)
Do you like this video?
Play Sound

Together for Days, also known as Black Cream, is a 1972 independent film directed by Michael Schultz and starring Clifton Davis and Lois Chiles. The plot deals with interracial romance between a black man and a white woman and the reaction by their friends and family. The film was shot entirely on location in Atlanta and is notable mainly for featuring the debut of Samuel L. Jackson in a supporting role. In addition, it apparently featured a shock ending described by one critic as, "so staunch and so real, it [would] blow all my staunch black sisters' minds," though it is unclear what exactly it involved.

Apart from this, not much else is known about Together for Days or how it may have drifted into obscurity the way it did. It is unknown if the original masters still exist of if they have been destroyed. Jackson himself jokingly claimed during an interview on The Tonight Show in 2010 that he was glad that no one, including host Jay Leno, had been able to locate a copy. Ultimately, it is rather unlikely that the film will ever see any sort of re-release.

A review of the film, adding more details 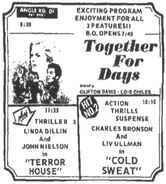 A newspaper version of the poster.
Community content is available under CC-BY-SA unless otherwise noted.
Advertisement