Touli le gardien des rêves (Touli The Dreamkeeper in French) was a French stop-motion animated series that was originally aired in 1992. The series had no dialogue, but its title and opening theme were in French. Produced by S.F.P Productions, Canal J and France 3, it was spanning on 101 episodes of two or three minutes.

It was about a little clown, Touli, who lived inside a whimsical land, and whose job was packing children's dreams inside boxes and filing them out on paper. He had magical powers, being described by the show theme as the "number one magician" (he had a "1" written on his chest). Several things disrupted him on his job, including among others magic sentient slippers that forced themselves to be worn by Touli (much to his annoyance), or a short-haired gorilla who was cold and asked him to knit him a sweater (with whom he then goes skating).

According to some other viewers who caught it on TV, it was originally shown on public TV channel France 3. In the mid-1990s, it was also screened on overseas French-language channel CFI, among other now-obscure cartoons (as it was maybe cheaper to license). Thanks to the recently discovered episodes with Persian text, we can assume that the series aired in Iran as well. Small pieces of information about a Russian version are circulating too.

UPDATE 29 May '14: 51 episodes have been uploaded to the Persian website TeleWebion ! The opening is missing the lyrics, so the episodes are very likely to originate from the same airing as the previously found episode.

UPDATE 26 Apr '14: Article author The Reynard recently discovered and brought to our attention that an episode of Touli had been uploaded to Persian video sharing site zamanema.com! The episode has since been mirrored on YouTube, (as well as mega.co.nz), courtesy of PepsiWithCoke (aka bearfan121) and can be seen below. It should also be noted that the found episode's opening theme is an instrumental version, lacking any lyrics (probably as the result of it being sourced from a foreign airing). Thanks guys! 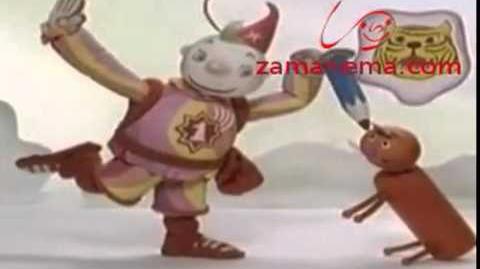 An unnamed found episode of the series.
The found episode.
Retrieved from "https://lostmediaarchive.fandom.com/wiki/Touli_le_gardien_des_rêves_(1992_Stop-Motion_Animation_Series)?oldid=73345"
Community content is available under CC-BY-SA unless otherwise noted.