Found
Ufouria: The Saga is a Metroidvania platformer developed and published by Sunsoft.

Magazines from the US show screenshots of Ufouria: The Saga. One of them was a title screen that said "LICENSED BY NINTENDO OF AMERICA, INC.", hinting that an American release was planned. 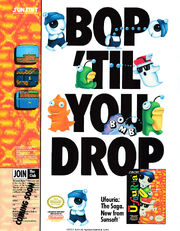 There was also an advert to promote the game in the US, but even then, it became a collector's item and sells for a higher price, thus making it a rare item.

However, the quirky character design caused the US version to be scrapped (which is also the reason the American release of Mr. Gimmick was scrapped).

On March 23rd, 2021, the prototype was finally found by armadylo, with even a ROM image of it being released.