The Peanuts has had three specials unproduced for television.

These specials were originally meant to air sometime around the 1990's but they have been scrapped and nobody ever talks about them.

I'll Be Home For Christmas

Snoopy decides to enter a skating competition in faraway Hollywood, which sadly keeps him from spending Christmas while Charlie Brown, who wants nothing more for Christmas than to have his dog back home. Lucy also wants Snoopy back...to pay his delinquent psychiatric bill-a whopping twenty cents!

It's A Dog's Life Charlie Brown

Snoopy writes his memoirs and those of his siblings, chronicling their adventures together during WWI and beyond. Charlie Brown is entrusted with proofreading the final draft before it's sent to the publisher. Linus and Lucy listen as Charlie Brown reads aloud and, like most of Snoopy's writing, it begins ominously: "It was a dark and stormy night..."

Will Ye No Come Back Again Charlie Brown?

Charlie Brown and the gang head to Scotland to compete in a singing competition. Meanwhile, Snoopy goes golfing at St. Andrews tries his hand at sheepherding, and leads the kids in choir. Charlie Brown and Linus try to win the affections of a little Scottish girl named Nell and the three of them go on a search for the Loss Ness Monster, but what will they see instead? 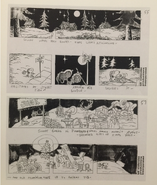 Add a photo to this gallery
Retrieved from "https://lostmediaarchive.fandom.com/wiki/Unproduced_Peanuts_Specials?oldid=131276"
Community content is available under CC-BY-SA unless otherwise noted.