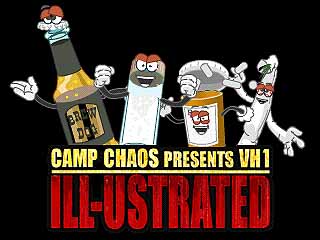 VH1's ILL-ustrated was a show that ran on VH1 from 2004 to 2006 sporadically. The show involved sketch comedy with charactertures of famous celebrities. The most frequently featured ones were Arnold Swarzeneger, Michael Jackson, and Pee Wee Herman. The show occasionally had good ratings, but ultimately VH1 had to cancel it, despite it's many episodes produced. Critical opinion was split, some feeling like it was too similar to South Park, others feeling that some of its skits were stronger than others, and a third camp that absolutely loved it.

The show became quite obscure after it ran its course. VH1 itself discluded it from their website and even Wikipedia went a few years before producing its own article. The show became mostly unavailable online with the exception of several "Good Time Party Squad" sketches, the most beloved part of the show by fans.

It was inevitable that full episodes found their way onto the internet. One notable YouTuber is known to have leaked a handful of episodes online, however there are still plenty of them missing. It is unknown if the YouTuber uploaded the whole series as Viacom (VH1's parent company) is notorious for quickly removing things, but leaving other pieces out there to float around the internet.

Another possibility for why the show is little seen might have to deal with rights issues. VH1 had airing rights, but the production company, Camp Chaos Productions, were the copyright holders. The company went under not too long after the show finished, with only one other known production to their name.

With the show having the ratings that it did to last 2 years, it is very likely that this one will be uncovered in its entirety.

Retrieved from "https://lostmediaarchive.fandom.com/wiki/VH1%27s_ILL-ustrated_(Missing_Episodes_of_2004-2006_Series)?oldid=38321"
Community content is available under CC-BY-SA unless otherwise noted.