The first VeggieTales episode, titled "Where's God When I'm S-Scared," has some differences in original 1993 copies from the first 500 print run, such as:

The unfinished version of the theme song has been uploaded by JuniorAdventurer, and the rest of the tape was finally uploaded on August 4, 2017, onto a Google Drive. 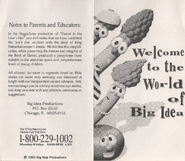 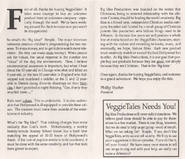 Add a photo to this gallery
Retrieved from "https://lostmediaarchive.fandom.com/wiki/VeggieTales:_Where%27s_God_When_I%27m_S-Scared%3F_(Original_1993_Version)?oldid=111029"
Community content is available under CC-BY-SA unless otherwise noted.