While VeggieTales has had 3 Brazilian dubs (all of them named Os Vegetais) so far, one of them from 1996 has been almost completely lost. Only one episode has been found so far, and two others (the 1st 2 episodes) are no longer in Lu9's possession, making the dub harder to find. 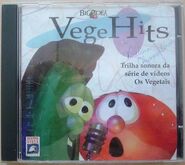 VegeHits
Add a photo to this gallery

Retrieved from "https://lostmediaarchive.fandom.com/wiki/VeggieTales_(Partially_Found_1996_Brazilian_Dub)?oldid=163344"
Community content is available under CC-BY-SA unless otherwise noted.