VeggieTales has a Korean version, which aired on KBS1, EBS. which can't be found anywhere, however an ad for the Korean dub has been uploaded on YouTube and can be seen below.

UPDATE August 2018: The Korean dub of Jonah has been uploaded on Vimeo.

Along with this, clips from certain episodes were found in Korean but they are now deleted.

Today, he has uploaded the Korean dub of Fib to YouTube. 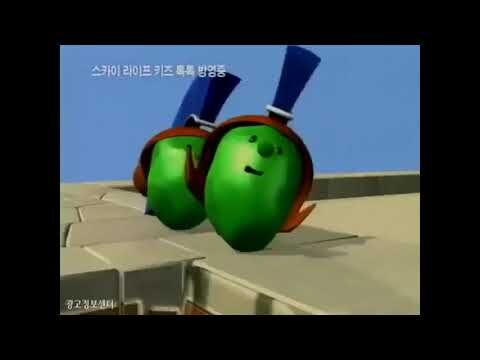 UPDATE 28 Novemver 2020: Two episodes were mentioned where no video was found on a personal site, writing lyrics about the theme of animation, drama, etc. It is an episode called "세 친구, "심술쟁이 청포도 가족". But Neither seems to be a video release.

UPDATE 28.5 Novemver 2020: "심술쟁이 청포도 가족" was It looks like the dub of "God Wants Me to Forgive Them?!". Because the green grape family was mentioned in the title.

Retrieved from "https://lostmediaarchive.fandom.com/wiki/VeggieTales_(Rare_Korean_Dub)?oldid=179074"
Community content is available under CC-BY-SA unless otherwise noted.