As heared in the 2005 promo, and then again in a promo featured on some Thomas & Friends DVDs, (yes, they really put Wow! Wow! Wubbzy promos on Thomas DVDs.) the theme song for the pilot had the same lyrics as the final version, with the exception of the line "And when they get together the fun never ends!" being replaced with "And when they are together the fun never ends!" in the final version, however, Wubbzy's voice sounds completely different and so do the vocals for the theme.

Listen to the theme here.

In The pilot, there was gonna be 26 episodes of the pilot. Unfortunately, there was only 1 episode to exist and it was never released to the public. In the beta version, everybody at the playground has tiny little tails, except for Wubbzy. They tease Wubbzy for having a long and bendy tail. In the final version, only Wubbzy is seen having a tail. 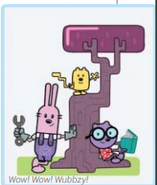 promo of the pilot 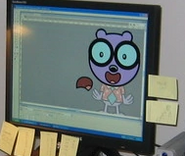 Rough sketch of the animation magazine image
Add a photo to this gallery
Retrieved from "https://lostmediaarchive.fandom.com/wiki/Wow!_Wow!_Wubbzy!_(Partially_Found_Original_2005_Pilot_Episode)?oldid=207571"
Community content is available under CC-BY-SA unless otherwise noted.