15 known (The others are just different recordings)

As with Happy Monster Band, Maggie and the Ferocious Beast and Max & Ruby, Wow! Wow! Wubbzy! was redubbed for the UK market. The British dub was taken off Nick Jr. UK around 2012 and Nick Jr. 2 in 2014 due to Viacom losing the rights. As of now, a good chunk of season 1 is available, but season 2 is mostly lost.

The series is available on Amazon Prime Video in the UK, but they're all the US dub episodes. There was only 1 DVD release, called Wubb Idol. This is a British DVD which uses the US dub.

Part of the British theme song can be found on an old Nick Jr 2 video, alongside a clip of the episode "Come Spy WIth Me" which uses said dub. And there is also "Home Is Where The Heart Is".

A user named lonelyfangs has recorded footage of the UK dub, the link lies.(Click here.)

New season 2 footage from a YouTube video named "Holly climbing then talking", the episode is Cupid's Little Helper but partial, the link is here, and its on Google Drive. This is the only footage of the Wow! Wow! Wubbzy! season 2 UK dub, alongside "Home Is Where The Heart Is" (Note: this file is deleted from Google Drive)

More season 1 footage was found by Wubbable from a YouTube video named "Be Happy" where 2 kids sing the Be Happy song from the episode "Widget Gets the Blooey Blues". 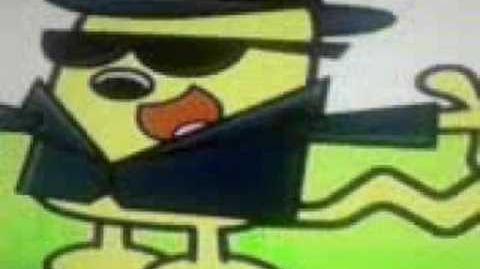 Home is where the heart is
PAL Pitched song