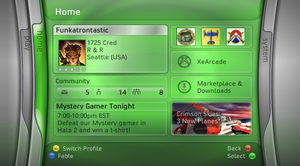 Xbox 360 system software (or Dashboard), is the updatable software and operating system for the Xbox 360. It resides on a 16 MB file system and has access to a maximum of 32 MB of the system's memory.[1] While the System Software updates may sometimes provide updates to the system's firmware, it is unlikely that this occurs with many, if any, updates. The updates can be downloaded from the Xbox Live service directly to the Xbox 360 and subsequently installed. Microsoft has also provided the ability to download system software updates from their respective official Xbox website to their PCs and then storage media, from which the update can be installed to the system.