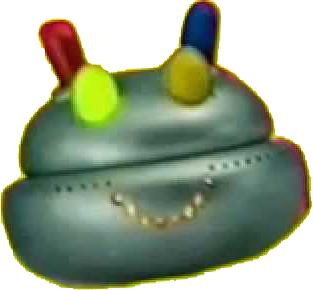 Zingalong was a very little known programme that aired on CBeebies from 2002 to 2004. The show revolves Zing, a machine from outer space, visiting a nursery to collect new sounds and explore noise with the help of Zoe, played by Marie-Claire McManus.

Barely anything is known about this programme on the Internet but there have been forum posts of the website Mumsnet talking about how annoying the show was for them. YouTube user Rory Connors (TV As it Was) has an (incomplete) episode of the show but has uploaded it in mid 2015.

July 30, 2015 UPDATE: Jaden Cargill has uploaded a full episode of Zingalong to YouTube! It is likely the second episode based on its title. Thank you, Jaden, for uploading an episode of the previously lost series! The full episode can be viewed online.

November 11th 2018 UPDATE: Essasetic (Known for finding the whole Planet Ajay series) found another full episode of Zingalong! Not much info is known about the episode, other that the episode is centralized around rabbits.

Currently there are 5 full episodes and 2 incomplete episodes. "Farm: Pigs" has been uploaded by vlogger Classic New Television in April 2021.

Retrieved from "https://lostmediaarchive.fandom.com/wiki/Zingalong_(2003_Children%27s_Series)?oldid=197985"
Community content is available under CC-BY-SA unless otherwise noted.